MTV's original four girls are back - and two are reliving their Pregnant days! 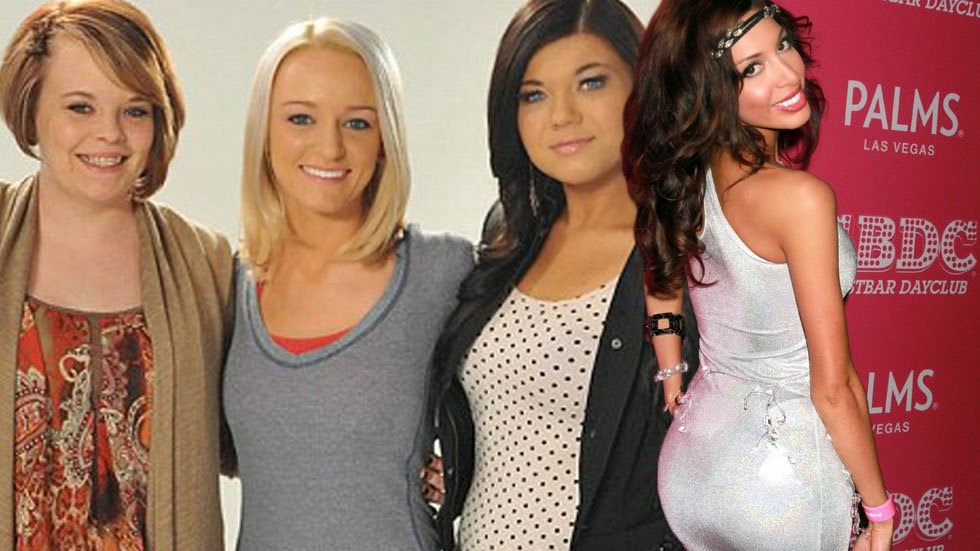 Maci
For 16 and Pregnant alum Maci Bookout, learning she was 23 and in the same condition was a shock. Diagnosed with polycystic ovary syndrome, "I didn't think it was possible," the mom of Bentley, 6, tells Us. "I had to Google 'Can you have a false positive?'" With daughter Jayde due in June, the Tennessee social-media marketing specialist and boyfriend Taylor McKinney, 25, are pumped. Says Bookout of their two-year romance, "Every day I wake up and want to be the best for him, and he does the same for me." It's the type of teamwork she still lacks with coparenting partner Ryan Edwards, 27. "We don't argue, but we don't really talk to each other either. It will never get easier."

Being back on camera doesn't feel at all familiar for Amber Portwood. "It's my first time doing this sober," says the Indiana native, who completed a 16-month jail stint for drug-related charges in 2013. During Teen Mom, "I was like a robot. My mind was foggy. Now, I'm clearheaded, and it feels great." Officially done with baby-daddy Gary Shirley, 28, Portwood has a new costar: "funny, smart, mature" live-in fiance Matt Baier, 43. "He can handle me," the 24-year-old says of the Boston transplant and dad. (They met on Twitter.) As for daughter and "little diva" Leah, 6, who still lives with Shirley full-time, Portwood says, "I need to go the extra step. I want joint custody."


After feuding with the girls over her adult entertainment career, Farrah Abraham tells Us the Teen Mom war is history. But she's still at odds with mom Debra Danielsen, 57. "We're going to counseling and trying to get through the blocks," the Austin resident, 23, says. "I'm determined to better myself, but I don't feel that all people in my family are the same way." Currently focusing on "real estate and wealth management," the mom of Sophia, 6, has found success in the romance department. Abraham, who dates salesman Simon Saran, describes her perfect guy as "stable, business savvy and on the same page of Christianity as I am. Hopefully I have that."

Catelynn
Engaged off and on for five years, Catelynn Lowell will finally have her day in church. Since calling off their 2013 vows, she and middle school sweetheart Tyler Baltierra "have worked on our relationship and ourselves," she tells Us. Now it's a flurry of flowers and cake tasting as the Couples Therapy alums plan August nuptials in northern Michigan. The Conquering Chaos coauthors, both 23 - who placed daughter Carly, 5, for adoption - are also living out a long-held dream since welcoming daughter Nova January 1. "We've yearned so badly to be parents," says the stay-at-home mom. "I don't ever want a second wasted. And Tyler's so good with her. She's such a Daddy's girl already!"