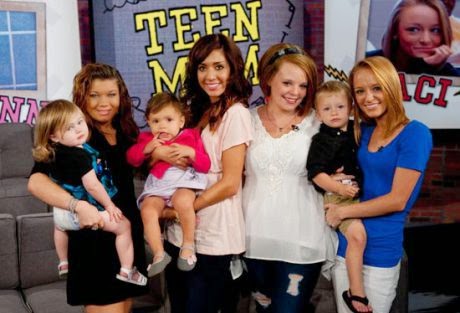 Farrah Abraham, Amber Portwood, Catelynn Lowell, and Maci Bookout revealed what fans can expect from their “really grown up” Season 5 and dished on their new relationships.
After describing the new season of Teen Mom OG with words, including “tough,” “different,” “true,” and “crazy,” the stars went on to reveal what was hardest for them to film.
“I think the only thing that I was scared to film was a conversation with Brandon and Teresa, and it definitely was tough to watch it, too,” Lowell explained.
Added Bookout, “My co-parenting relationship with Ryan, and just talking about Ryan so much. It’s so annoying, because I feel like in the show it’s going to look like my life revolves around Ryan and it doesn’t.”
For Abraham, who returned to Teen Mom OG after being initially excluded, she claimed her most difficult scene was her final night serving as a feature at a gentleman’s club.
“We were getting ready with my family, and going to the club and showing that there’s just so many people and so many different emotions, it’s either going to be hilarious or kind of like, ‘Oh my gosh,'” Abraham explained.
As for Portwood, she claimed the hardest thing to film were segments about her ex-boyfriend, Gary Shirley, whom she no longer has much communication with, and, therefore, doesn’t have a lot to say about.
When Teen Mom OG premieres, fans will be reunited with the returning members of the show and their ex-boyfriends, including Gary Shirley and Ryan Edwards, and meeting a couple of new boyfriends.
“I’m hoping my and Taylor’s relationship is a big part of my story, but I swear it seems like all we do is talk about Ryan,” Bookout said of her new life with Taylor McKinney, with whom she is expecting her second child.
Portwood is also dating someone new, Matthew Baier, and the two will be seen getting engaged on Teen Mom OG.
“I think it will be more positive, actually.”