Our Teen Moms are really very talented girls. I think you know it if you have seen Teen Mom TV Show. They are really different and have different life stories but we love them as they are! And what to know about them as much as we can! So.. Where we can get their secrets? Try to ask them? Watch each part of the show for million times? Use some magic? I know better answer! We can read their books! So let's look thru the Teen Moms books... 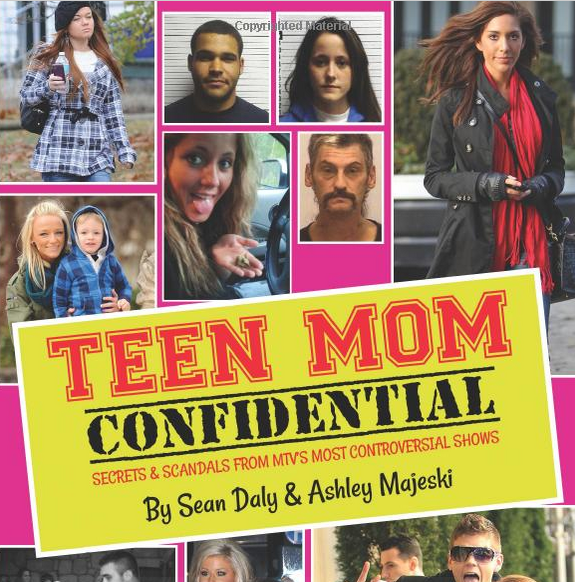 Think you know everything about Amber Portwood, Jenelle Evans, Kailyn Lowry, Maci Bookout,Farrah Abraham, Catelynn Lowell, Chelsea Houska, Leah Messer and the rest of MTV’s famous young moms? Think again! From how the girls of 16 and Pregnant were cast to the Teen Mom stars’ outrageous diva demands and the touching letter from Stormie Clark to the granddaughter Farrah won‘t let her see, these are the true, behind-the-scenes stories of TV’s most fascinating and controversial shows. Forget the rumors! Teen Mom Confidential is packed with first hand memories, newly published photos and updated interviews with the cast members everyone is talking about.

'Pride Over Pity' by Kailyn Lowry Kailyn Lowry is the feisty, unapologetic, tattooed beauty whose determination to raise her son on her own terms has been documented on MTV’s critically acclaimed, hit series Teen Mom 2. Across five seasons, fans have watched her grow from a vulnerable, pregnant teen into a fiercely independent young mother. Through the breakup with the father of her child and the ensuing custody battles, her struggle to come to terms with her troubled childhood, her diagnosis with bipolar disorder, and relentless online bullying, Kailyn has faced it all with her head held high and her spirit intact.
But there is more to her story than what has been seen on television. In a moving effort to finally put the past behind her, Kailyn shares her troubled, often painful story and, for the first time, reveals the dark secrets she has so closely guarded. Guided by the single principle of helping other young girls like her, she takes the reader behind the scenes, writing candidly about her desperate stay at a homeless shelter to qualify for a program that would provide a safe home for her son, breaking her silence on the question of her sexuality, and sharing the traumatic sexual experiences that have left her deeply scarred.
Pride Over Pity is a raw, brutally honest, and ultimately inspiring account of a young woman’s resolve not only to survive but to succeed. Since Catelynn Lowell and Tyler Baltierra shared their story of teen pregnancy and adoption on the MTV's 16 and Pregnant and Teen Mom, they've been known for their inspiring commitment to growing up right. Between their experience placing their first daughter for adoption, and their struggle to cope with problems in their families, Catelynn and Tyler were challenged in every imaginable way. But against all odds, the childhood sweethearts rose above the dysfunction to become responsible adults whose story has inspired many others.
How did two troublemaking kids from the trailer park make it through the storm of family dysfunction, teen pregnancy, and adoption without letting go of each other? What gave them the strength to conquer the chaos of their lives and go on to become people their children could be proud of? And what really happened when the cameras weren't there?
Now, in their debut book, Catelynn and Tyler tell the story in their own words...and they leave nothing out. From the wild behavior that went down before MTV to their experiences learning and teaching about adoption, Catelynn and Tyler lay it all out on the table. Open, honest, raw, and real, Conquering Chaos is an incredible look at two young people who beat the odds and used their victories to give hope to others. “I got off the phone and I tried to calm down, but my mind was racing.  Derek was the father of the baby I was carrying inside me.  He was my first love, my only true love. We hadn’t spoken in more than two months, but crazily I had still hoped we had a future together—me, him, and our baby, as one happy family.  It’s every teenage girl’s dream, isn’t it?  You meet a boy, you fall in love, and then one day you have a family and grow old together, happily ever after.”Fans of MTV’s critically acclaimed hit series, Teen Mom, have followed Farrah Abraham’s tumultuous life as a single teen mother.  Her fiery, relentless spirit, and her unwavering commitment to getting the best out of life for herself and her daughter Sophia in spite of all the drama constantly surrounding her have made her a beloved star and media sensation.  Now, in this unflinching, at times heartbreaking, memoir, Farrah reveals the difficult truth about the life that hasn’t been seen on television.

'Never Too Late' by Amber Portwood When Amber Portwood debuted on MTV’s hit reality series 16 & Pregnant, no one could have predicted that the teenager from Anderson, Indiana with the dry sense of humor would go on to become one of the most controversial young celebrities in reality TV history. But soon after Amber stepped into the public eye, her life spiraled into chaos.
From her struggles with anxiety, depression and addiction to her brutal onscreen fights with her boyfriend, Amber seemed a troubled young woman destined to destroy herself. And that was all before she shocked everyone by sending herself to prison for seventeen months!
But behind Amber Portwood’s shocking behavior is a story the cameras never captured. It’s a story of hardship and hope, of relationships torn apart by tragedy and addiction and put back together with strength, love and determination. After years of losing herself in a daze of sex, drugs and depression, Amber made the decision to stand up and do whatever it took to save her life, her family, and herself.
With her trademark honesty and dry sense of humor, Amber tells the real story of how she learned to deal with the demons that nearly destroyed her. Never Too Late sends a powerful message that no matter how far down a person might fall, it’s never too late to get back up and change the future.

In the Making (Celebrity Sex Tape) First in the Celebrity Sex Tape trilogy.
The journey...

Hot sex. A few thrills. A lot of tips and tricks. There has to be more to life than this, and I’m going to find it.

I’m like every other person out there: I want to be loved and I want to be happy. But in the words of my best friend, I have to kiss a few frogs along the way. That’s okay, I know what I want and I’m not afraid to go after it, to hell with what other people think. My name is Fallon Opal, and I’m not who everyone thinks I am.

To the world I’m another starlet gone crazy: always traveling, clubbing non-stop, and juggling drug problems and alcohol issues. The truth couldn’t be further from that. I’m on a journey to find myself and I’m going to do it without shame—my way. Sometimes it feels like the world is against me but that won’t stop me from getting mine.

An Exotika® contemporary erotica story from Ellora’s Cave from the New York Times bestselling author and star of MTV’s 16 and Pregnant, and Teen Mom.

The Secret's Out: 2 (Celebrity Sex Tape) Sexual fantasies come alive. Twists and turns; ups and downs. There is more to life than meets the eye and I don’t know if I live to tell the tale. But it’s worth a shot.

I'm like every other person out there: I find myself in a constant struggle between living out my sexual fantasies and not wanting to feel regret. In the end I want to be loved and happy. Friends, family, co-workers, and even nobodies always want to try to give me advice. But I know what I want and I’m not going to lose sight of my happy ending, to hell with what other people think. I know who I am and I will always be Fallon Opal. I’m just not who everyone thinks I am.

To the world I'm another crazed hungry starlet: shaky romances, multi-million dollar endorsements and deals, party addictions, top news and back-stabbing friends—the never-ending topic of conversation. The public may finally be starting to see through the fog of sulfur in the air to the person underneath the fame. I’m on a journey to find myself and I’m doing it in the bluntest way possible—my way. Sometimes it feels like the world is against me but that won't stop me from the lifestyle I’ve always wanted.

An Exotika® contemporary erotica story from Ellora’s Cave from the New York Times bestselling author and star of MTV’s 16 and Pregnant, and Teen Mom. The fly-by-night lifestyle fades into the background. With enough sexual stories to last a lifetime, I find myself…the person I was destined to grow into. There’s more to this life, there’s The One. I can get anyone I want and this time that little voice that whispers “I’m going to do it” more than pays off.

I'm not like every other person out there: Through the journey I’ve realized I’m not like many people. I am stronger than most and have found faith that others will finally see the person I really am behind all of the gossip. Many people fail to meet their potential but there are others who exceed their own dreams. I am one of those people.

To the world I'm not another starlet gone crazy: I have found the realism of life and its best parts through every day experiences that I have made seem more bold and epic than anyone else could. Through this, I have shared with the world, making history not only in entertainment, but through social efforts and diplomatic ventures. I have changed the world as we know it. It took some scandal to get so many to follow my story but the ending is well worth it—happy or not. The masses of the public grow to be more than just puppets of Pop Culture and idolism…as I grow into the woman my husband marries.

Some times books are much interesting then TV Shows so you can try nd find one for your taste. Really good present for a Teen Mom Show fan.

Do not forget to watch new series and read news of Teen Mom OG Show on http://www.teenmomogshow.com/ It will be something really great! And who knows... maybe we will read new books written by our Original Girls.

Teen Mom 2 season 7 All about dads